Rob Fisher, principal, and builder, has built new homes in the Northern Virginia area for almost 25 years. He has overseen the design, development, construction, and customer satisfaction of some of the most exclusive communities and reputable builders in the area. He began his career with Foley Custom Homes in Vienna, VA before moving on to serve as a supervisor for NVR. In 1986 he joined A&A Partnership in Alexandria, Virginia. As Construction Manager, he was responsible for Harborside, a waterfront community of luxury townhouses in the heart of Old Town. In 1994 Rob joined Pulte Homes to open StoneRidge Builders, a division of Pulte Homes offering high end, semi-custom homes to the Mid Atlantic market. Under StoneRidge Builders, Rob oversaw such notable projects as McLean Hundred (McLean); Ashgrove Plantation & Clarks Crossing (Vienna); and Timberlake and Windsong Estates (Oakton).

Rob led Pulte’s efforts in establishing themselves as the undisputed leader in customer satisfaction. During his tenure as Vice President of Customer Relations for the Mid-Atlantic Region, Pulte won an unprecedented five JD Power and Associates New Home Customer Satisfaction Awards. The experiences and lessons learned in building some of the most exclusive projects in Northern Virginia, while creating an industry benchmark in customer satisfaction, helped create the foundation upon which Fisher Custom Homes was established. 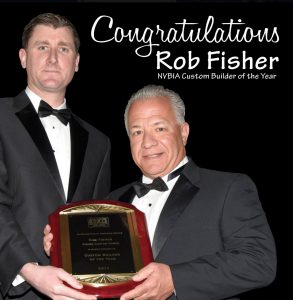 In 2010, Rob decided to turn his passion for building homes into a personal business, and Fisher Custom Homes was born. Over the course of the last several years, Rob has worked diligently to establish himself as one of the most prestigious and sought-after custom home builders in the Vienna, VA and surrounding areas. Rob’s quality, attention to detail and personal touch has earned him a reputation as the ‘builder of choice’ among his peers, his homeowners, and prospective buyers.

Throughout his career, Rob has earned the reputation for being customer-focused, attentive to his customers’ needs and maintaining impeccable attention to detail. He is committed to building relationships and ensuring client satisfaction in each home he builds.

Rob was born and raised in McLean, Virginia; he graduated with a double major in business and psychology from James Madison University and has lived and raised his family in Vienna since 1987.

Rob Fisher was appointed to the Board of Building and Fire Prevention Code Appeals by Supervisor Kathy Smith. His term is for four years. Rob is the owner of Fisher Custom Homes and manages all facets of home design, purchasing, sales, and onsite construction management. He won the JDPower & Associates annual award for new homeowner satisfaction in the Washington DC market five times between 2004 & 2009.

Thanks for signing up!